\(\chi^2\) goodness of fit tests are used to test whether the counts of observations belonging to two or more categories differ from those under an expected model. For example, what is the likelihood of a sample of 60 women and 40 men in a class coming from a population where the sex ratio is actually 1:1? In this example, there is a single categorical variable of sex, with two categories of male and female.

The test statistic is:

where O and E are the observed and expected numbers in each of the categories from 1 to k.

The observed numbers come from your actual observations, in this example 60 and 40.The expected numbers are from a theoretical expectation of the frequencies under the model being tested. In this example, if you were testing against an expectation of a male:female ratio of 1:1, then you would expect 50 women and 50 men in a sample of 100 people.
For this example,

You can calculate \(\chi^2\) pretty easily with a calculator. You would then need to determine the probability of obtaining that \(\chi^2\) value from the known probability distribution of \(\chi^2\).

Alternatively, you can do all of this in one go with the chisq.test function.

where x = the observed data (i.e., counts in each category) and p are the expected probabilities for each category.

In this example we would use:

where x is the observed range of numbers and p has the expected probabilities.

You are not constrained to just two categories, or an expectation that the counts in each are equal. For example, to test whether the counts 10, 20 and 70 in three categories came from a population with expected frequencies of 0.25, 0.25 and 0.5, you would use:

The output from a goodness of fit test is very simple: the value of \(\chi^2\), the degrees of freedom (number of categories - 1) and the p-value. The p-value gives the likelihood of your observed counts coming from a population with the expected frequencies that you specified.

Exploring the residuals becomes important when there are more than two categories in the test, as the \(\chi^2\) test will only tell you if the observed frequencies differ from the expected across all categories, not which particular category is over- or under-represented.

Independence. The \(\chi^2\) test assumes that the observations are classfied into each category independently of each other. This is a sampling design issue and is usually avoided by random sampling. In the sex ratio example, there would be problems is you deliberately chose women to add to your sample if you thought that you had enough men already.

Sample size. The \(\chi^2\) statistic can only be reliably compared to the \(\chi^2\) distribution if sample sizes are sufficiently large. You should check that at least 20% of the expected frequencies are larger than 5. You can see the expected counts for each category by adding $expected to the end of your \(\chi^2\) test. For example,

If this assumption has not been met, you could combine categories (if you have more than two), run a randomisation test or consider log-linear modelling.

Visual. Count data are best presented as a bar plot with the counts on the Y axis and the categories on the X axis 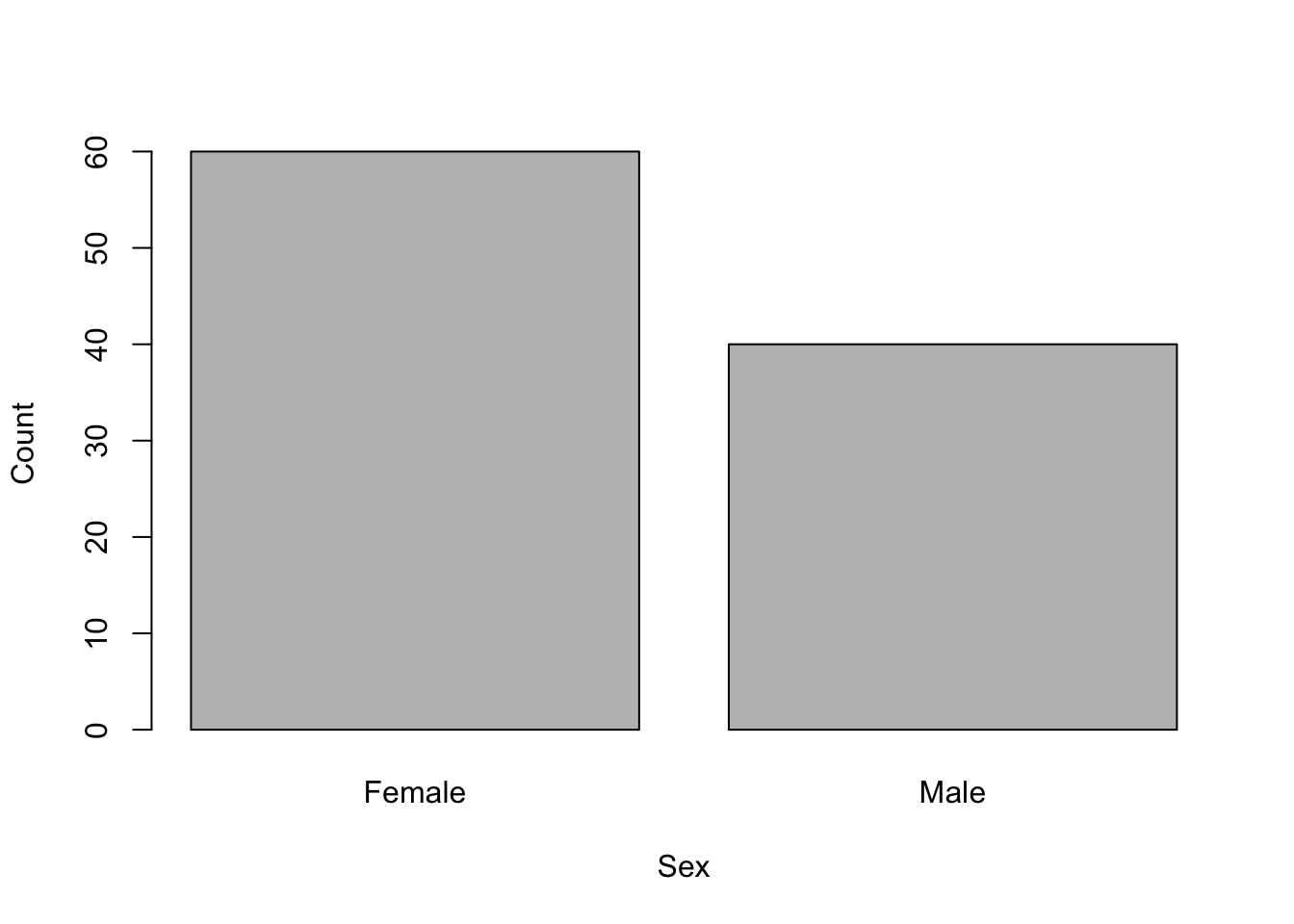 See the graphing modules for making better versions of these figures that are suitable for reports or publications.

Type ?chisq.test to get the R help for this function.