First read our introduction to meta analysis with instructions for calculating effect sizes. Now, we consider the statistical models to estimate mean effect sizes and the influence of moderator variables.

There are two main models of meta-analysis: 1) the fixed-effect model and 2) the random-effect model (actually we say 3 types, but the third one is the extension of the second model). Because fixed effects mean something different in another context, this naming is a bit confusing. So people now call the first model ‘common-effect’ model. You can see a visual representation of these two models (from Figure 4 in Nakagawa et al. 2017).

A math representation for the common-effect model is:

where \(y_i\) is the \(i\)th effect size (from \(i\)th study), \(b_0\) is the overall mean (or meta-analytic mean), \(e_i\) is a deviation from the overall mean and it is normally distributed with \(v_i\), which is the study specific sampling variance (you can get this from formulas above). Note that weights for this model are \(1/v_i\). As you can see, this is a very simple model; basically, we are estimating the mean considering weights.

Importantly, this model is assuming that there is a common mean for all studies included. Is this realistic? Probably not, especially, if you are combining different species!

The random-effects model can be written as:

where \(s_i\) is a study-specific deviation from the overall mean for \(i\)th study, it is normally distributed with the between-study variance, often referred to as \(\tau^2\), and the others are the same as above. Unlike the common-effect model, a random-effect model assumes that different studies have different means. Note that weights for this model are \(1/(\tau^2+v_i)\). We revisit this point, as it turns out to be quite important.

Let’s use the function rma from metafor to run a common-effect model.

We specify the effect size (yi), its variance (vi), the method (“FE” for fixed-effect) and the data frame (dat).

To see the output, use summary on the model object:

OK, it was easy! The overall mean is statistically significant and it’s around 0.2. What does 0.2 mean? Let’s convert this back into the original scale - a response ratio of the control and experimental means.

This means a plant trait (e.g. mass) was 22% larger in the experimental group (RR\(=\bar{x}_{E}/\bar{x}_{C}\)), which seems like a pretty large effect to me (remember we need to interpret our results in a biological meaningful way). Note that Jensen’s inequality states that this is a bit wrong, but we will not get into this today.

Now, we move onto the random-effects model - a more realistic model. Again, we use the rma function, but this time change the method to REML which is the default and the best method for the random-effect meta-analysis.

Heterogeneity is variation in effect sizes, which is not accounted by the sampling error variance.

In other words, real variation in the data. I think \(I^2\) is a quite important index as it can tell the percentage of real variation in your meta-analytic data. It can be given by (which you saw within the figure of the random-effects model above):

We recently did a meta-analysis of meta-analyses (a secondary meta-analysis) looking at what is the average value of \(I^2\) in the field of ecology and evolution (Senior et al. 2016). The average value was 92%! So this indicates that we should really be fitting the random-effects model rather than the common-effect model because the latter assumes heterogeneity to be zero or \(\tau^2=0\) and \(I^2 = 0\). Or is it really? We find this out later.

The existence of heterogeneity sets a scene for meta-regression. This means that we now put predictors (‘moderators’ in the meta-analytic terminology) into our model to explain heterogeneity (equivalent to normal regression models).

Fitting meta-regression is pretty straightforward too. In this example, let’s fit three moderators that were collected by the authors: 1) time (how long the experiment was), 2) method (different ways of increasing CO\(_2\)), and 3) fungroup (functional group, i.e., angiosperm, gymnosperm or N\(_2\) fixer).

We use rma again, but now have a model statement.

Well, they do not explain anything! Look at the \(R^2\) value and, as you expect, the test for moderators (again the Q value) say they are not significant. A terrible model! So we give up here (in a real meta-analysis, you need to do this more systematically, preferably based on your priori hypotheses).

OK, it seems like an CO\(_2\) increase promotes plant growth (which may not be surprising), but we are assuming the data set we have does not suffer from publication bias.

But there are several methods, which people have been using. The two commonest methods, often used as a set, are: 1) funnel plot, which one uses to detect a funnel asymmetry (a sign of publication bias), and 2) Egger’s regression test with which you test funnel asymmetry statistically.

What am I talking about by ‘funnel asymmetry’? If you plot effect sizes and its standard error in a decreasing order (\(se\); see the figure below) , we suppose to see a funnel up-side-down with effect sizes with low \(se\) (or high weights) are more tightly aggregated than effect sizes with high \(se\) (or low weights). But this funnel shape occurs only when we do not have publication bias. If there is, we should see funnel asymmetry. This is because studies with small sample sizes (i.e. high \(se\), which leads to non-significance) are less likely to be published. We will see an example of this funnel asymmetry in our data set.

To create a funnel plot and run Egger’s test: 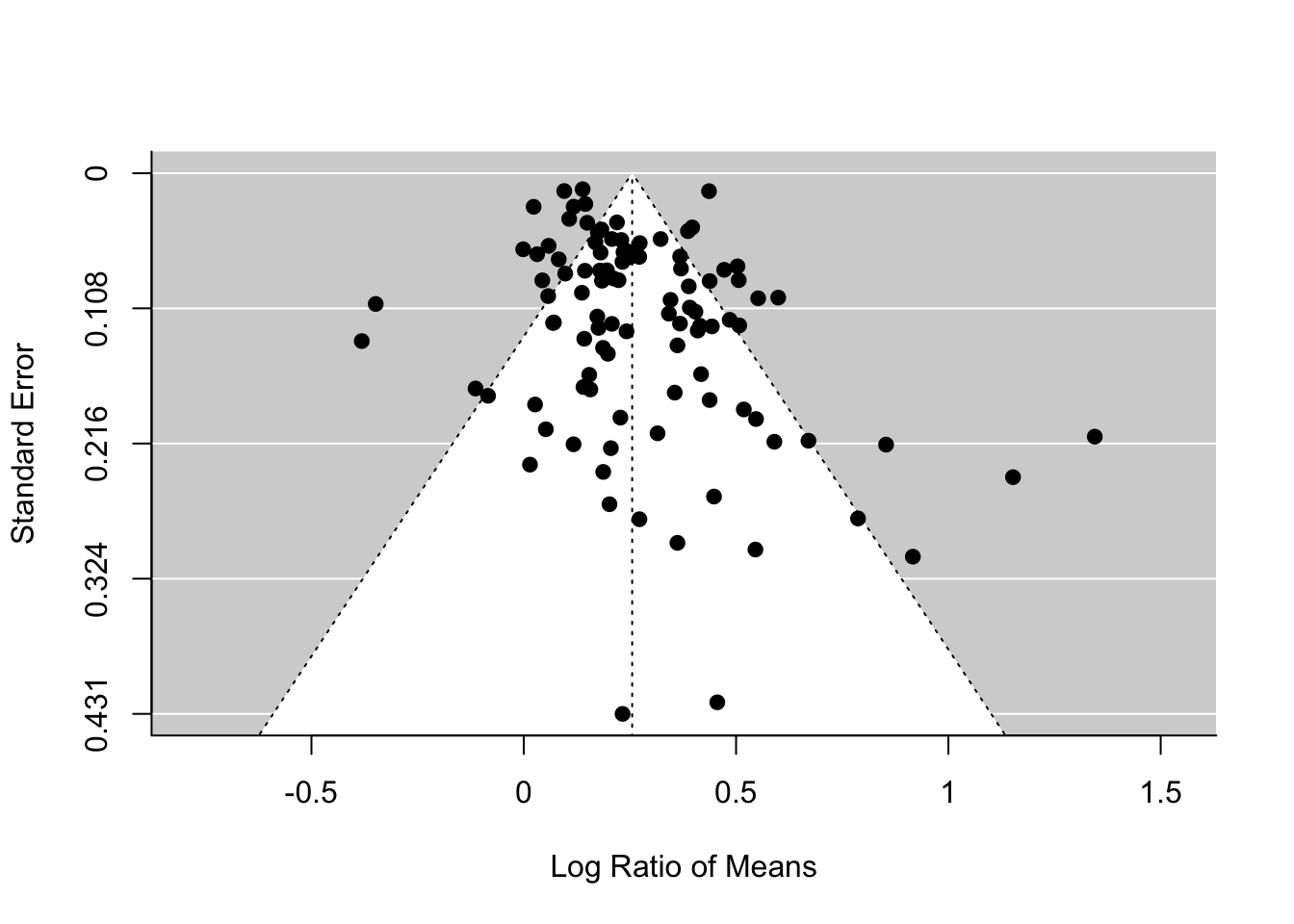 The funnel plot and Egger’s test both suggest funnel asymmetry. But we need to be careful. Funnel asymmetry cannot be caused not only by publication bias but also by heterogeneity (one or more undetected moderators are distorting a funnel shape). Given we have a lot of unexplained variance (i.e. heterogeneity), we are not sure which is causing this asymmetry. But we have some evidence for publication bias. A relating point is that if meta-regression explains a lot of heterogeneity, you should use that meta-regression model in the function regrest (in our case regrest(metareg), but I did not do it as our model metareg did not explain anything).

There is an alternative method, which has a cool name, the trim-and-fill method. You will see the reason why. We can use this method by using the function trimfill. 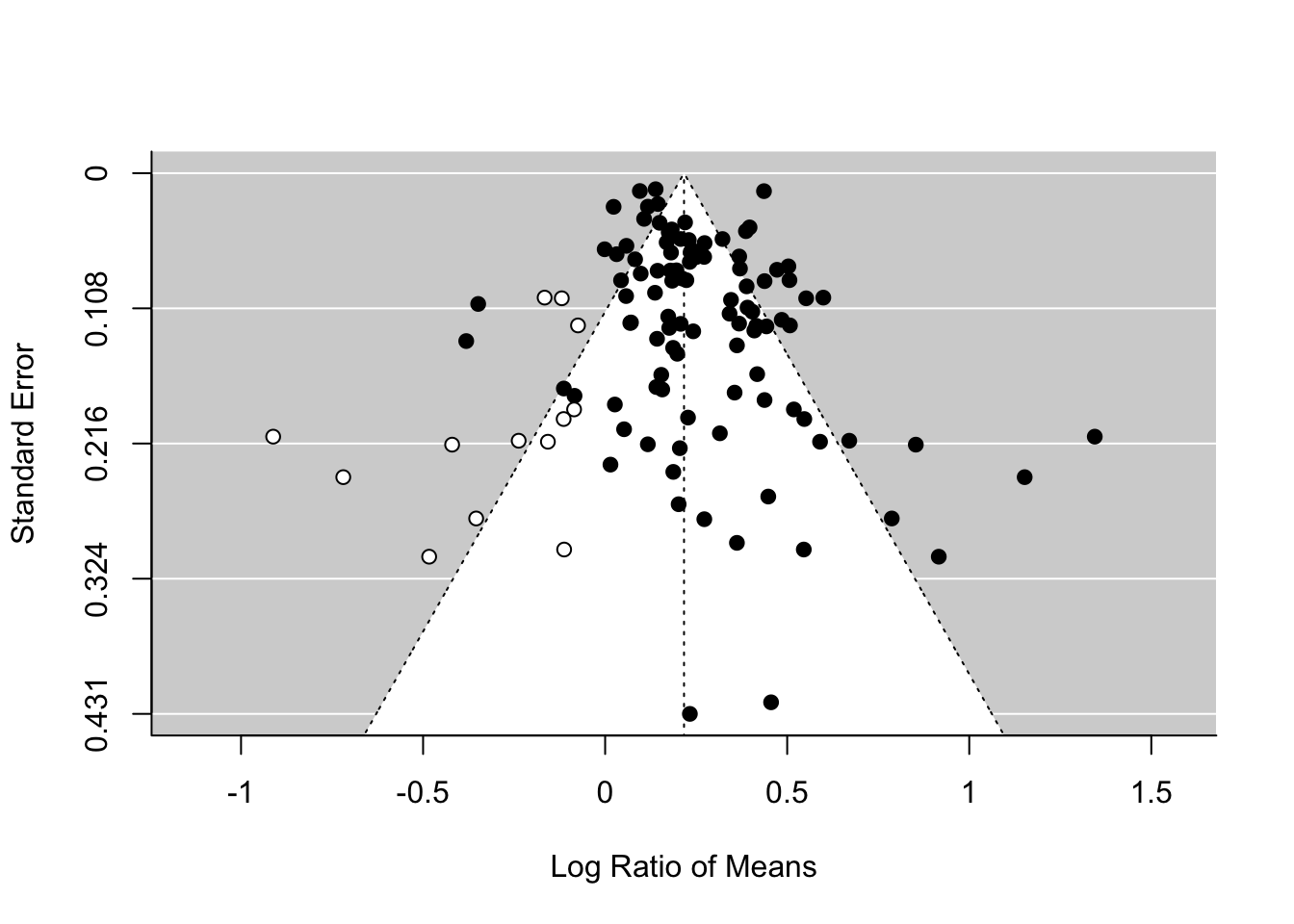 There are more methods for publication bias tests, none of which are perfect, but we do need to do some of these tests (see more for Nakagawa et al. 2017 and references therein).

Another model (I did not know), but important!

I recently learned that there is another meta-analytic model (neither common nor random), which is more robust to publication bias. Remember what I said above.

This is problematic because under publication bias like we saw it just above, effect sizes with small sample sizes (very high \(v_i\)) should get small weights compared to effect sizes with large sample sizes (low \(v_i\)). When there exists publication bias, the random-effect model could provide us with a biased estimate… What could we do? Can we use the weight of \(1/v_i\) like the common-effect model, but use the structure of the random-effects model? It turns out you can!

This model is based on the paper by Henmi and Copas (2010). Although it is more robust to publication bias, I do not know any meta-analyses in the field of ecology and evolution, which uses this model. Probably we should be using this model rather than a random-effect model? I think so - let’s call this model the ‘robust’ model. I think we should use this robust model for meta-regression too. I acknowledge Wolfgang telling me about this model to me.

If you are happy with all this, move on the more complex models

Any questions? Or email me (s(-dot-)nakagawa(-at-)unsw(-dot-)edu(-dot-)au). Also visit our website

Go to the metafor package’s website. There you find many worked examples.

Henmi, M., and J. B. Copas. 2010. Confidence intervals for random effects meta-analysis and robustness to publication bias. Statistics in Medicine 29:2969-2983.